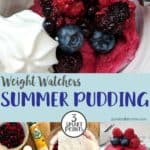 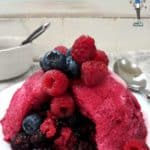 So you can have dessert without breaking your point budget!

For those unfamiliar with Summer Pudding, it is a popular British dessert that is made by layering sliced white bread in a bowl and then filling with summer berries.

It is then turned out on to a plate and can be topped with fresh fruit and served with cream.

I used frozen fruit for this recipe as it was a cheaper option and just topped it with some fresh berries.

You know how I said that this was a great tasty dessert?

Well, I just discovered that it is also a pretty damn good low point breakfast too 😀 😀

Whilst writing up this recipe I realised that I hadn't eaten breakfast and that there was a single portion of Summer Pudding still in the fridge from last night!

So I just ate it with a couple of tablespoons of fat free Greek yogurt for breakfast - yum!

So, anyhow, to make this dessert you only really need a few ingredients, sliced white bread, summer fruits, a bit of sweetener of your choice and some spray oil for the bowl.

Most recipes for Summer Pudding call for thick white sliced bread to be used.

As anyone doing Weight Watchers knows, thickly sliced white bread is high in points. So I swapped thick sliced bread for Warburtons White Danish Weight Watchers bread. It's only 1 SmartPoint per slice, 2 SmartPoint for two slices.

The thinness of the bread did not make any difference to the pudding and it still retained its shape when turned out.

If you can't find the Weight Watchers bread in a store near you, there are a number of other breads that can be used for the same point values.

If you are in the US, take a look at this list of Low Point Breads

If you are in the UK, take a look at this list of Low Smart Point Breads (UK)

I lined a 0.5 L Pyrex Bowl like this one to make the pudding.

If you are making this Summer Pudding for more people (you can use the slider in the recipe card to work out measurements for this) then use a bigger bowl.  For example a pudding for 8 will need a 1 litre pudding bowl.

I used 2 - 3 sprays of Frylight sunflower spray inside the bowl and then used the slices of white bread to line the bowl, over-wrapping the bread so as not to leave any gaps.

The fruit was then spooned in to the middle and the remainder of the bread was then layered on top.

The pudding then needs a weight placed on top of it before it's put in the fridge overnight.

If you have a saucer that is small enough to sit on top of the pudding without resting on the lip of the bowl then use that with a can on top to weigh it down.

Alternatively, you can use a circle of parchment paper and layer with baking beans or dried lentils etc.

Just make sure that the parchment paper is big enough to overlap the bowl - you don't want any stray baking beans or lentils making their way into your dessert : D .

I hope that you enjoy this recipe for Weight Watchers Summer Pudding. 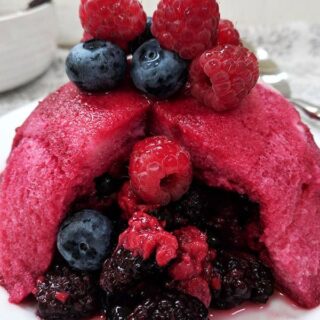