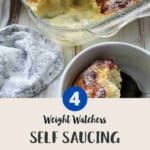 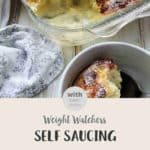 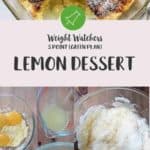 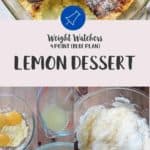 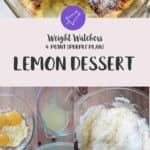 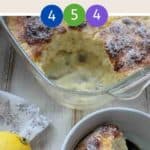 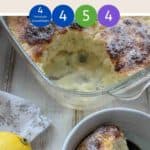 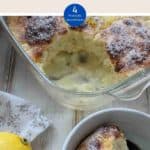 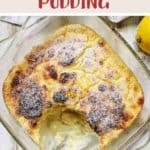 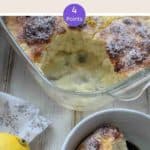 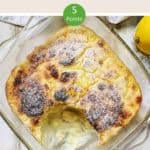 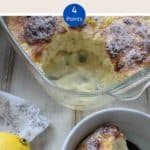 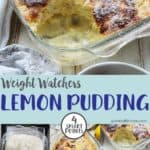 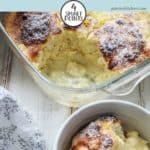 So, I'm in love! In love with this tasty self saucing Lemon Pudding! It is both sweet and tangy, with a fluffy sponge sitting on top of a thick creamy lemon sauce.

To find out how many Personal Points this recipe will be for you & to track it in the WW App, click on the blue button in recipe card below!

So, I decided that I would work on reducing the points.  That way I could carry on eating it but not blow my point budget every time I did!

It still has the sweetness of the original dessert which is cut through with the tangyness of the lemons.

It's a bit of a magic pudding this one!

Once baked, you get a thick layer of creamy, lemon sauce which is topped with a soft moist sponge. How good is that!

And, just in case you didn't hear me before, all this for 4 SmartPoints per portion (Blue & Purple)!!

The portion isn't a small one either - you get a good serving for your points!

Tips for making this Self Saucing Lemon Pudding:

Although this dessert is best served straight out of the oven, it is also delicious served cold.

It is perfect eaten as is,  but can also be served with a dollop of fat free yogurt or with some half fat cream if you have the Points available.

What I used to make this dessert:

I used an electric hand whisk, like this one, available from Amazon.

I used a lemon squeezer which can be brought from Amazon, to juice the lemons. So easy!

If you like this recipe for Lemon Pudding, you may like this Raspberry Jam Sponge or this fruity Summer Pudding. 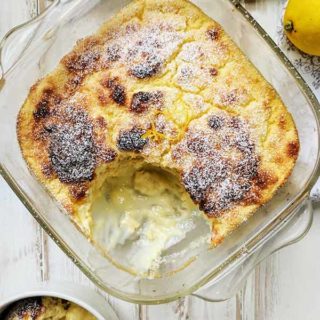