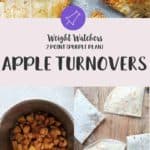 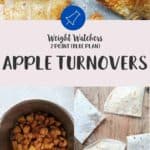 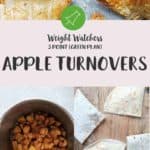 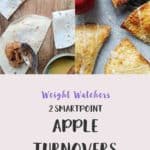 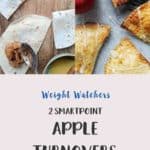 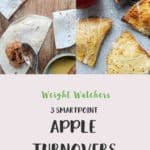 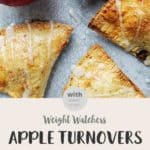 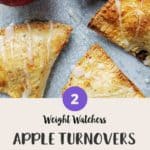 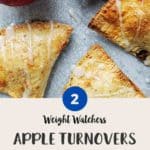 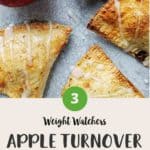 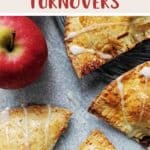 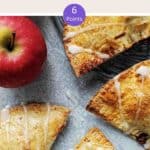 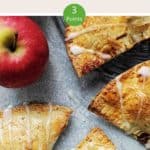 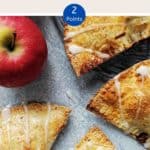 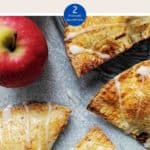 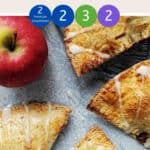 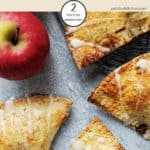 These tasty, easy to make Apple Turnovers are just 2 SmartPoints per piece on Weight Watchers Blue, Purple & Freestyle plan. They are 3 SmartPoints per turnover on the myWW Green plan.

And if you can't stop at one turnover, then two will set you back 5 SmartPoints on all of the myWW plans.  Not bad for 2 of these lovely sweet treats!

Recipes for Weight Watchers friendly Apple Turnovers have been doing the rounds of WW forums for some time.

Some use sandwich thins as the 'shell', some use light puff pastry and some use tortilla wraps!

I've tried all three as I adore anything sweet 😀

But I think the tortilla wrap ones are my favourite.

They are sturdy, are less fiddly then using sandwich thins and best of all they are low in SmartPoints.

Plus you get a lot of turnover for your points and that has got to be a good thing ... hasn't it!

The tortillas are filled with a sweet apple & cinnamon filling, are brushed with an egg wash & baked till golden and crispy.

They are are then drizzled with a small amount of sugary glaze.

How I made these Apple Turnovers

I don't like Sweetener! Can I use sugar instead?

I used a stevia based non calorie granulated sweetener in this recipe. It measures tsp to tsp like sugar.

If you don't like using sweetener, you can swap it for 2 level teaspoons of sugar instead. This increases the point value slightly - 1 Apple Turnover would be 3 SmartPoints and 2 Apple Turnovers would be 5 SmartPoints.

Best Apples for these Apple Turnovers

Use a sweet variety of apple to make these Apple Turnovers. That way you can get away with using less sweetener than if you use sharper tasting apple varieties.

For a sweet tasting apple use varieties such as

Which wraps are best for making these Apple Turnovers.

I used WW White Wraps. They are 3 SmartPoints per wrap. The 4 wraps that were used in this recipe, worked out as 14 SmartPoints in total.

Sainsbury's be Good to Yourself Tortilla Wraps work out at 15 SmartPoints for 4 wraps - meaning that each turnover would be 2 SmartPoints and two turnovers would be 5 SmartPoints.

If you use other brand wraps just beware that the SmartPoints can vary widely!

For example Tesco White Tortilla Wraps work out at 22 SmartPoints for 4 (meaning that one Turnover would be 3 SmartPoint and two Turnovers would be 7 SmartPoints).

If you are in the US, there are a number of 1 SmartPoint wraps including the Extreme Wellness Wraps  & Mama Lupes brands, both of which are available to buy as multipacks from Amazon.

Using these brands reduce the SmartPoint value of these Apple Turnovers to 1 SmartPoint for one and 3 SmartPoints for two on the Blue & Purple plans !

Omit the icing sugar glaze and use 3 teaspoons of demerara sugar instead to sprinkle over the top of the turnovers for a bit of sweet crunch.

Mix 1 - 2 teaspoons of pumpkin spice into the apples rather than using cinnamon and nutmeg.

Swap the cinnamon and nutmeg for your favourite apple pie seasoning mix.

If, like me, you love dessert you may also be interested in this 7 SmartPoint Apple Cake or these 4 SmartPoint Banana Muffins with Streusel Topping. These Pumpkin Spiced Scones are very popular and are 7 SmartPoint per generous piece!

If you are looking for a zero point dessert then take a look at this Lime Fluff! It's really good!

I have found that these Apple Turnovers keep in an airtight container for a couple of days.

However, they do go a little soggy. Just pop them back in a warm oven for 5 - 6 minutes to crisp up and warm through before serving.

It is probably best to store them prior to putting the glaze on, but it's not vital as long as you're not bothered about how they look as they still taste delicious! 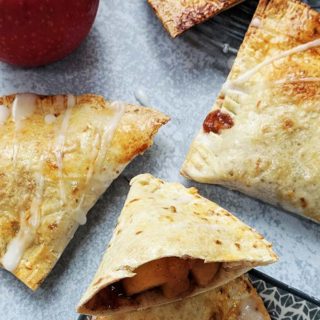