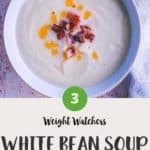 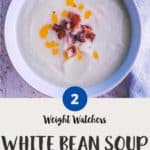 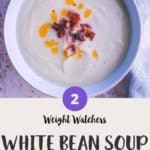 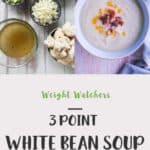 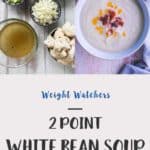 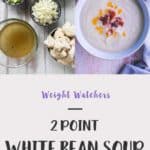 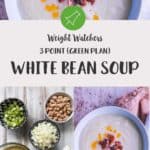 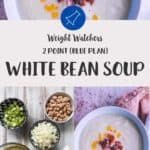 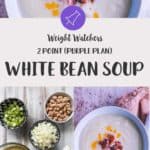 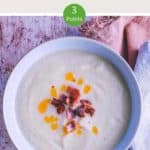 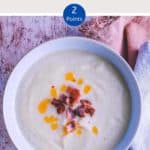 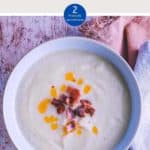 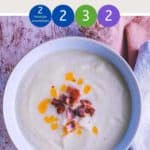 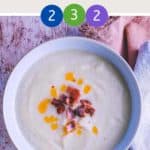 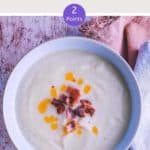 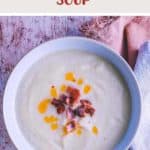 This filling and tasty White Bean Soup is just 2 SmartPoints per portion on Weight Watchers Freestyle, Blue and Purple plans. It is 3 SmartPoints per bowl on the WW Green plan.

I topped off the soup with a little chopped up bacon for an extra crunchy, salty interest but this soup is really tasty without (& less Points too)!

Now that the world has turned upside down and everything that I have known & taken for granted has altered, I, like so many people, have been finding it difficult to concentrate on my WW journey.

But the last couple of days I've had a bit of a mental shift and have started to plan & track again.

I've also started to write up some of the recipes that I had developed before the pandemic struck.

This White Bean Soup is filling and comforting - and heaven knows we need comfort at the moment.

I don't want to carry on 'comforting' myself with chocolate, cake, cookies, chips - all those foods that I used to eat prior to starting my WW journey.

I REALLY don't want to come out of this lock down pounds heavier than when I went in. I know that for me that won't do my mental health any good what so ever.

I feel happier, healthier and more in control when I stick to the WW plan. I know it and know that I am not alone in that.

So .... I am looking for some kind of compromise! Comforting foods that are low in SmartPoints.

This soup is one of them!

One bowl of this soup with a slice bread (take a look at this list of Low Point Breads) keeps me full and satisfied from lunch to dinner!

Oh, and did I say it's pretty easy to make too!

Tips for making this soup!

Which White Beans should I use?

I used a 15oz (400g) can of cannellini beans (also known as White Kidney Beans) in this recipe. Once drained and rinsed they weighed just over 8oz (230g).

You could also use navy (pea) beans, baby lima beans, haricot beans or even butter beans. Just make sure that you use a can that gives you about 80z (230g) once drained.

What Bacon can I use?

I used bacon medallions in this recipe. They worked out at 2 Points for 4 medallions.

If you are unable to find bacon medallions, you could use bacon bits. They work out at 2 Points for 2 tablespoons.

SmartPoints in this soup!

Weight Watchers changed their program at the end of 2019 and it now includes 3 individual plans. This gives anyone following the WW program choice on how they use their SmartPoint allocation.

Using the official WW recipe builder I have worked out the SmartPoints for this White Bean Soup for each of the plans. 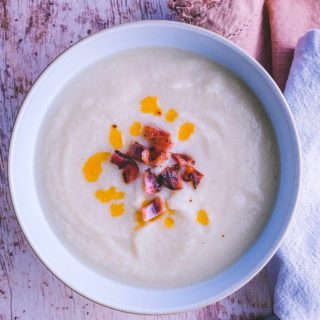