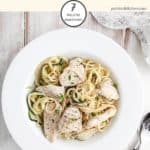 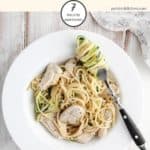 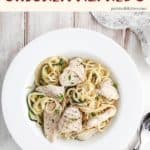 If you follow the WW Personal Points plan you can find out how many Personal Points this recipe will be for you & track it directly in your WW App by clicking on the blue button in recipe card below!

Whichever WW plan you are on, you'll find this recipe is a fraction of the points of traditional Chicken Alfredo.

This lightened up version will be one that you will make again and again.

For anyone who is following any of the WW plans and misses big bowls of creamy pasta, this is the recipe for you! It's a creamy Chicken Alfredo which consists of succulent chicken, pasta, a creamy sauce but also zucchini noodles to bulk it out, meaning you get a lot of 'dish' for your Points!

... well, at least the huge bowls that I was used to eating prior to starting WW were high in Points!

One thing that I have learnt is to bulk out pasta dishes with spiralized veg! That way I can eat big bowls of 'pasta' but for less Points than if I just used pasta.

Whoever thought of spiralizing zucchini (courgette) is a bit of a genius.

The zucchini looks like pasta (except for the green bits!), has a similar texture to pasta if cooked properly (DO NOT boil 😀 ) but is zero Points. It's also pretty easy to prepare!

I've tried out a few different spiralizers, a couple of the small hand held ones and an electric one but this type, available from Amazon, is by far the best that I have used.

Of course, you could also buy ready made zucchini noodles. You can find them pre-packed in chiller compartments of most large supermarkets.

Most Chicken Alfredo dishes are made with mountains of pasta, heavy whipping cream and lots of parmesan cheese. Traditional recipes work out at around 20 Points per portion.

This recipe, however, has half the amount of pasta to most recipes & therefore the Points are reduced. As explained above, it is bulked out with zucchini noodles which are zero Points so you still get a big bowl of noodles!

For this recipe I also swapped the heavy whipping cream with a mixture of chicken stock, skimmed milk and light cream cheese. When reduced, this makes a lovely thick creamy sauce. I then add a little bit of parmesan cheese for added cheesiness!

If you like this recipe for Chicken Alfredo, you may also like these Weight Watchers friendly pasta recipes! 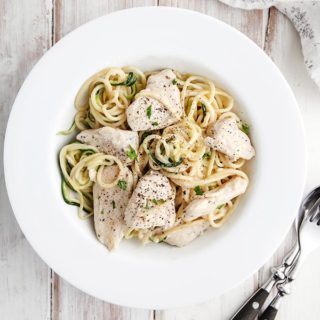