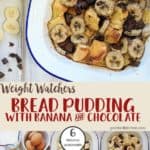 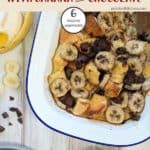 At just 6 Smart Points per portion on the Blue, Purple & Freestyle plans you can eat a serving of this pudding without guilt and whilst staying within your daily Smart Point allowance! It is 7 SmartPoints per serving on the WW Green plan.

To find out how many Personal Points this recipe will be for you & to track it in the WW App, click on the blue button in recipe card below!

Although not the prettiest of dishes this low Smart Point dessert certainly makes up for it in taste! A mix of dark chocolate, banana and smooth egg custard how could it not taste good!

I do love dessert and I especially love a good comfort food dessert.

And bread and butter pudding is the ultimate in comfort food!

However, I calculated the Smart Point value of the bread and butter pudding that I often made prior to joining Weight Watchers and it came out at a whopping 17 Smart Points per portion!!

I wanted to make a proper curl up in front of the fire with PJ's and slippers dessert so I played around with some recipes and came up with this Bread Pudding with Banana and Chocolate.

For anyone who isn't familiar with traditional bread and butter pudding, it is a classic British pudding made by layering buttered bread with raisins and topping with a creamy egg custard mixture.

It is then baked in the oven until golden brown.

For this Weight Watchers friendly take on bread and butter pudding, I didn't use butter and I didn't use raisins and I certainly didn't add double cream to the custard (as you really don't need to!).

I used chunks of baguette (giving the dessert volume) and than I dotted through dark chocolate and sliced banana.

I then made a simple egg custard flavoured with vanilla which I poured over the top.

It was baked in the oven until the custard set, the chocolate melted and the whole pudding puffed up and turned a lovely golden brown.

Unfortunately, the bananas also coloured a little bit too but you can't have everything can you!

Can I swap light brown sugar for a different sugar.

I have also cooked this pudding using granulated sugar and caster sugar - both of which you could substitute for the light brown sugar.

Which Baguette should I use?

If you are using a baguette that is more than 12 Smart Points for 140g you will need to recalculate the Smart Point value of this recipe.

Can I use sliced bread rather than Baguette?

You can find some great Low Point Breads here!

However, I found that using baguette (French bread) gives the pudding more volume and I like volume in my desserts! It looks like you get more dessert for your points!

How long does this dessert keep in the fridge?

This Bread Pudding with Banana & Chocolate is best served warm just out of the oven.

However, it can be kept in an airtight container in the fridge for a day or two. The bananas will brown though!

It is best to gently reheat the pudding before serving.

Other Weight Watchers dessert recipes made with bananas! 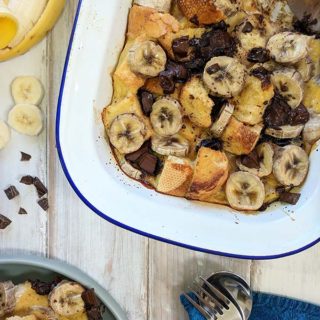