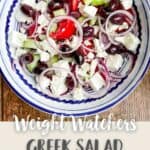 If you have ever been lucky enough to visit mainland Greece or any of the fabulous Greek islands you will know just how wonderful an authentic Greek salad is.

There is also usually a liberal sprinkling of oregano and a good drizzle of olive oil.

In this recipe, I left out the olive oil.

I honestly feel that the salad doesn't need any oil added especially when I'm trying to limit the number of SmartPoints.

Having said that - if you have the SmartPoints to spare, it is lovely with a drizzle of a strong flavoured rich olive oil.

You'll also notice that I didn't add oregano but that was because of a mix up with my online food order this week!! Urk!

How to prepare the salad.

What Feta Cheese should I use.

I use 90g of light / reduced fat Feta Cheese in this recipe. That works out at just under ¾ of a cup when chopped and is 5 SmartPoint on all of the Weight Watchers myWW+ plans (Blue, Green and Purple).

Full fat feta cheese works out at between 11 & 16 SmartPoints for 90g depending on the brand you use (some are preserved in oil).

You can purchase reduced fat / light feta cheese from most larger supermarkets. Look out for authentic Greek feta cheese rather than the less tasty (in my opinion!) Greek salad cheese!

Which olives should I use.

So , olives typically come preserved in either brine, vinegar or olive oil. Ten olives in brine or vinegar work out at 1 SmartPoint. Olives preserved in oil will be more.

I use black olives in this recipe. If you can get hold of them Kalamata olives are the best and work so well with the cheese and cucumber!

If you add olive oil (or any other dressing) to your salad you will need to point that separately.

Using the official Weight Watchers recipe builder I have worked out the SmartPoints for this Greek salad for each of the plans.

I worked out the SmartPoints for the cheese by entering the weight measurements into the recipe builder rather than the cup measurements as this is much more accurate!

Please note that the nutritional information in the recipe card below has been automatically generated and therefore may give you an inaccurate SmartPoint value.

This is because it does not account for any of the zero point ingredients on the WW plan. Nor does it account for variations in product brands and types, weights of individual ingredients etc.

Use the recipe builder on your WW App and you will see that the SmartPoint values that I have given are correct 😀 ! 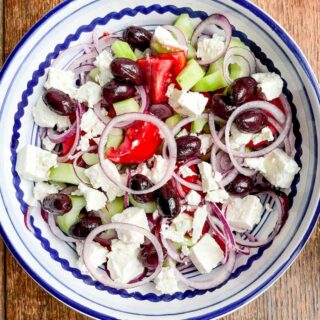 If you liked this recipe for Greek Salad, you may also like these Weight Watchers friendly salad recipes.