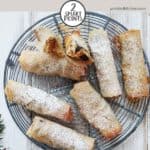 With Christmas just around the corner, who doesn't want a mince pie or two? These Filo Mince Pies are just 2 SmartPoints per 'pie' on Weight Watchers Freestyle plan.

For the Mince Pie newbies amongst you, they are a sweet pie of British origin that are traditionally served around Christmas. The sweet pastry case is filled with mincemeat, a mix of chopped dried fruit, spices and brandy, rum or whisky.

Not that Weight Watchers friendly really!

And just to add a few more SmartPoints to the mix, traditionally mince pies are made with a buttery, rich shortcrust pastry.

Because of this, shop brought mini mince pies tend to work out between 3 and 6 SmartPoints per pie.

If you are interested to see the Point values of some of the most popular brand mince pies, this list of Mince Pie SmartPoints is well worth taking a look at!

So these Filo Mince Pies are just 2 SmartPoints per 'pie'!

Yes, I know that they are not strictly 'pies' but I prefer the term 'pie' to 'cigar' or 'roll'.

To make them so low in SmartPoints, I bulked out the mincemeat with grated sweet apple and used filo pastry rather than shortcrust pastry.

I used shop brought mincemeat but you could use homemade (although it may be trickier to work out the points if you do).

How I made these Filo Mince Pies:

What I used to make these pies:

This post contains affiliate links. As an Amazon Associate I earn from qualifying purchases. Visit this page to see what that means.

I used Jus Rol Filo Pastry Sheets. This brand is widely available in the UK.

I used Waitrose brand mincemeat, which worked out at 10 SmartPoints per 100g.

If you are in the US you can by Robertson Classic Mincemeat from Amazon.  Beware, though,  as it works out at 15 SmartPoints per 100g so each Filo Mince Pie would be 3 SmartPoints.

I use a Silpat silicone mat, available from Amazon, to line the baking sheet when making these pies. 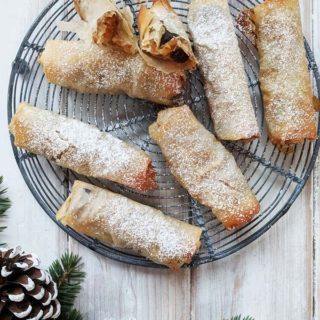