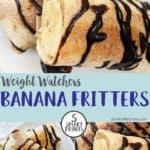 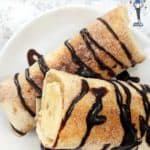 If you still follow along to the Freestyle or Flex plan they are 4 SmartPoints per fritter.

Of course you can reduce these values even further by finding even lower point wraps - the ones I used were 3 SmartPoints per wrap!

By substituting the sugar with granulated sweetener you can reduce the points further.

This post contains affiliate links. As an Amazon Associate I earn from qualifying purchases. Visit this page to see what that means.

I used mini tortilla wraps from Co-op at 3 Smart Point per wrap.

I cut a large banana in half and wrapped each half in a wrap, secured it with cocktail sticks and then fried them lightly in a teaspoon of vegetable oil.

I have tried these banana fritters using a calorie controlled cooking oil spray to fry, but the fritters turned out better with vegetable oil.

I've also just discovered Deli Kitchens Skinni Wraps, a bigger wrap for the same SP value as the Co-op mini ones, so you may want to try those out for more fritter for your buck!

The fritters needed turning often to ensure that they didn't catch on the bottom of the pan. Once they were golden brown and crunchy looking I took them out of the frying pan and rolled them in the sugar / cinnamon mix.

I used sugar rather than granulated sweetener for this recipe, but obviously you could reduce the SP value even further by substituting the sugar for sweetener.

Ways to reduce the Smart Points in this recipe!

Once the banana fritters were coated in sugar and cinnamon I plated them up & then drizzled them with  Sweet Freedom Choc Shot ! 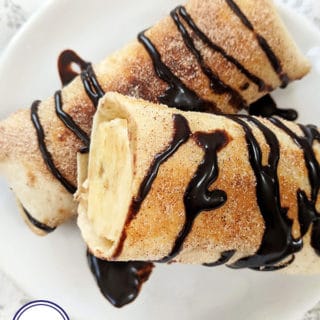